Cross-border collaboration between Czech, German and Polish libraries occupying the border regions was launched in 1993. Six years later, the EUREX Library working group was set up within the Neisse-Nisa-Nysa Euroregion. The Czech members of this group are the libraries in Česká Lípa, Jablonec nad Nisou, Turnov and Liberec. The German libraries are the Kultur-und Weiterbildungsgesellschaft (Culture and Further Education Company) Löbau-Zittau mbH and the Christian-Weise-Bibliothek in Zittau. The Polish libraries include the Krkonoše Library in Jelenia Góra.

The EUREX working group meet 3 – 4 times per year, each time on a different side of the border. Bilateral meetings are also held. EUREX exists for Czech, German and Polish libraries to recognise and share experiences. There are conferences, workshops and seminars, and joint publications on the libraries and cultural traditions of the Euroregion countries are issued. In 2003-2016, Kalmanach, a collection of local history / literary work was published with contributions by authors from all three countries.

The most significant events include a biennial two-day joint Czech-Polish-German conference of librarians, held since 2009. The conference discusses current issues of librarianship in the libraries of the Euroregion.
Since 2012, the working group has organized an annual literary walk, following in the footsteps of regional authors, librarians and their friends. This spawned a new tradition of informal meetings, mutual exchanges of experiences and recognition of the literary and cultural lives of our neighbours.
The third interesting project is the joint participation of all three countries in an art competition associated with the literary characters Krakonoš and Krabat. The initiative for this project came from the Jelenia Góra library in 1996. The library organizes an art competition for children from the Czech Republic, Poland and Saxony. Other libraries participate in the advertisement, collection of work and together they evaluate the resulting pictures. A travelling exhibition of the best works of art is taken to all three countries. 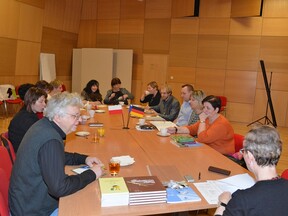 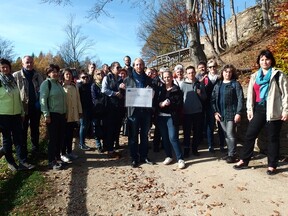 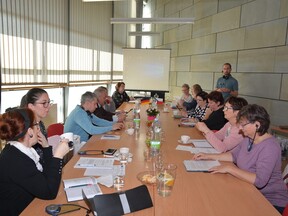